Hello, Dare 2B Artzy Friends!
No matter how old I get, I feel like I am still learning to surf as life throws new challenges at us!  Today’s card is dedicated to everyone who feels the same as I do! 🙂 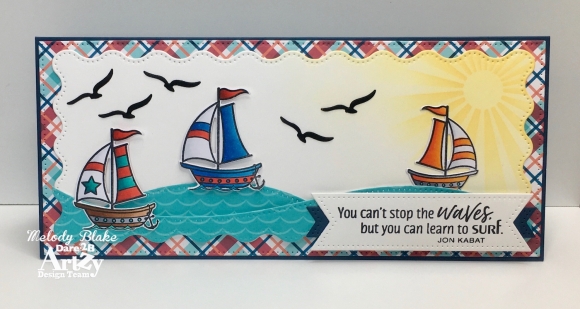 The sailboats and birds were die cut with the Anchors Away Die.  Next, I cut a blue card base at 8 1/2″ x 7 1/2″ and scored it in half.  The plaid Manatees paper was die cut with one of Dare 2B Artzy’s new Wavy Slimline Framelit Dies!
The white card stock was die cut with another die from that same set!

I wanted to add a little sunshine to the card so I used the D2BA Sunburst Stencil with Sunset Yellow Ink to blend the sun onto the corner of my card!
The sentiment was stamped from the Ocean Waves Stamp Set and die cut with one of the banners from this same set. The banner is longer than I needed so I just put my die cut back into the banner end and cut the excess off by running it through my die cutting machine once again!
The waves were die cut from the Under the Sea paper using another of Dare 2B Artzy’s slimline dies called Curvy Slimline Border Dies! 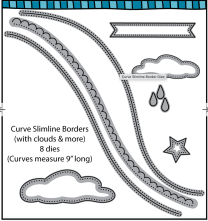 I can’t wait to use all the other dies included in these new slimline sets!

There is still plenty of time to enter the September Challenge on the Dare 2B Artzy Blog!  There is a $15 gift card up for grabs!
Happy stamping!
Melody

2 thoughts on “Still Learning to Surf!”